between nymphs and streams

In 1726 Camillo Eucherio Quinzi published the first edition of the poem "Inarime or the Baths of Ischia", a poem in which the learned Jesuit father reported the legend of Bagnitiello.

The young Acmeno, son of a nymph, lived in Ischia. One day, jumping from one bank to another of a stream fell into it. He called for help, but nobody heard him. Then he prayed to the gods. Finally, merciless Jupiter transformed it into a spring, saying to him: "Do not cry anymore, you child, do courage so worthy of a number, instead of tears, now you will flow with healthy waters that will alleviate the diseases and joy will bring. made your invocations vain, relief will find who is suffering from ear ache".
Suddenly the members of the child melt in water, the arms, softened the nerves, are transformed into running waters; the fingers and legs are liquefied.
Water becomes the bones and the humerus.

Spending your holidays in Ischia is synonymous with a dream that becomes a reality: the island has a soul with a multitude of different faces, combining nature and history, relaxation and entertainment, ancient traditions and international vacationing.
Not surprisingly, Ischia is nicknamed "the green island". From the coasts to Monte Epomeo, which dominates the entire region, rural paths and trails lead through the woods, allowing you to choose between relaxing walks and challenging hikes immersed in luxuriant nature and the intense aroma of flowers. The beaches of Ischia are renowned around the world: from the Maronti to the bay of San Montano, from Citara to Sant'Angelo. Here, the turquoise sea laps white beaches or dark, volcanic rocks.
And there is no lack of cultural attractions and places to visit on Ischia: from the Aragonese Castle to the Archaeological Museum of Pithecusae. Not to mention the typical fishing villages and countless traditional festivals that animate the towns throughout the year.
And don't forget the tradition of food and wine: typical Ischian dishes include both fresh fish and typical mountain dishes (like the rabbit "all'ischitana"), and wine is the hero! Rows of vines adorn the island, and the little labels from these bottles end up on tables all over the world.
Finally, the nightlife of Ischia, especially in the summer months, is more lively than ever: typical restaurants and restaurants of starred chefs, lounge bars, and nightclubs are present in all the largest municipalities of the island. 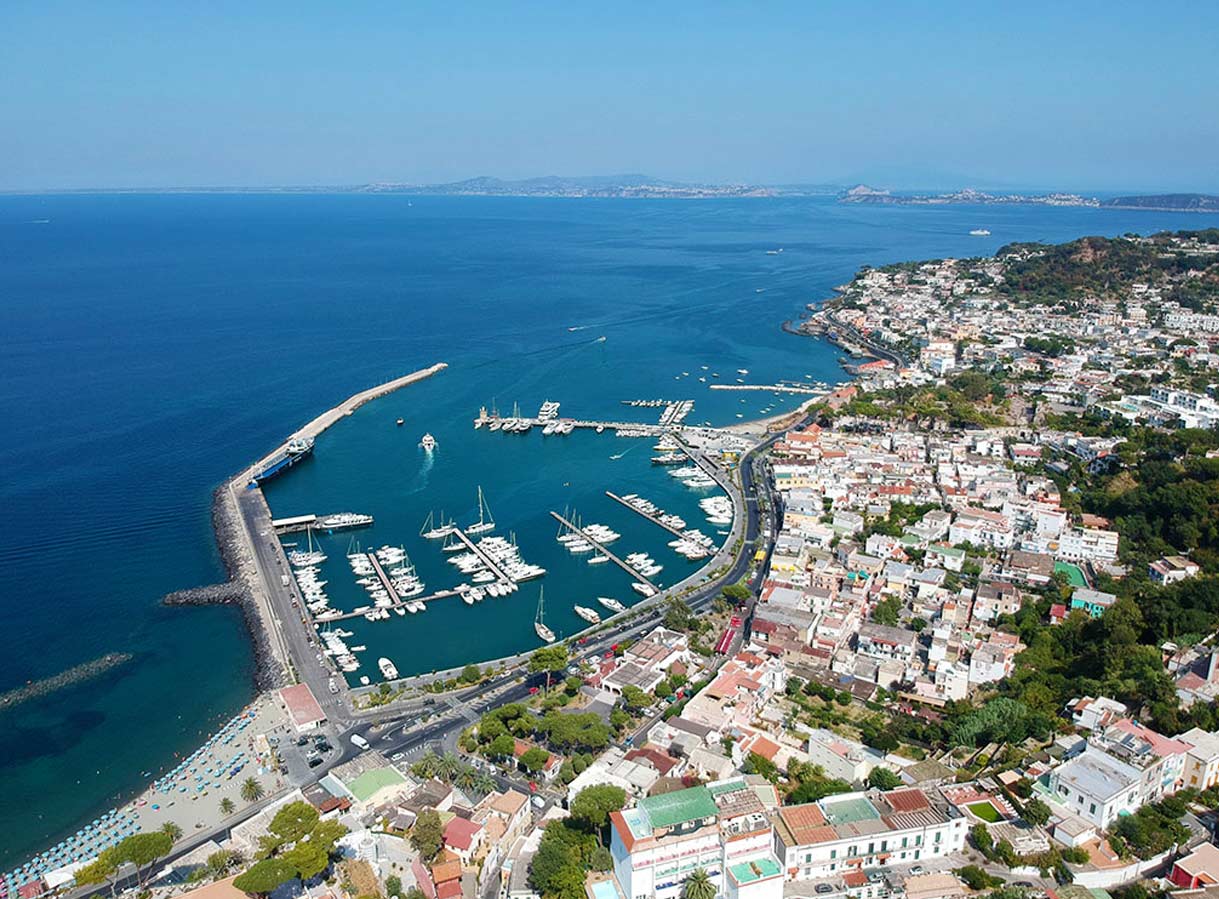 Divided into two hamlets, Ischia Porto and Ischia Ponte, this is the town from which the entire island takes its name. It is home to one of the main landings for hydrofoils and ferries, and the concentration of hotels, restaurants, and clubs is among the highest in the whole territory. In Ischia Porto, the so-called "Rive Droîte" is the real beating heart of the island's social life for both residents and tourists, with all kinds of shops, from artisan boutiques to luxury brands, and nightclubs distributed between Via Roma and Corso Vittoria Colonna to the port. The streets of Ischia Ponte recall the ancient maritime traditions of the village and wind up to the imposing Aragonese Castle, one of the symbols of Ischia. However, do not forget the sea; some of the most beautiful beaches in Ischia, like those of the Pescatori, Cartaromana, and English, are just minutes from the city centre.

On the northern coast of Ischia, Casamicciola Terme preserves ancient history, millenary spa tradition, and lush nature. Since ancient times, the municipality has been a destination for travellers from all over the world, but who is it the most popular one? Ulysses. According to legend, the hero shipwrecked here. As you can imagine, the history of Casamicciola is ancient, dating back to before the landing of the Greeks on the island. The thermal waters have been the hub of tourist development in the municipality over the centuries. A vocation for hospitality that brought here such illustrious figures as Giuseppe Garibaldi, playwright Henrik Hibsen and poet Alphonse de Lamartine. The tradition continues to this day. In addition to the thermal baths, you can walk along the Marina to shop in Corso Luigi Manzi, or pass through the Maddalena Forest (a pristine pine forest of over 40 hectares just a few minutes from the centre).

A mushroom-shaped rock, it is one of the symbols of the island of Ischia, as well as a hallmark of Lacco Ameno. Right on this beach, the first Greeks arrived in the VIII century a.c. Then, in the 1950s, Angelo Rizzoli built the first big hotel, giving way to tourism that has made Ischia the protagonist of worldly international news. Today, Lacco Ameno is still a favourite destination of many from show business types. A few minutes from the center, the picturesque bay of San Montano and the Negombo Park, the archaeological museum of Pithecusae boasts extraordinary pieces of Magna Graecia, such as the cup of Nestor. The Path of Alum has a breathtaking view, as well as restaurants, artisan shops, and beaches.

History indelibly marked Forio with the Saracens, leaving some of the most unique architecture in the world, defence towers on the coast and, in the 1950s, the presence of artists, directors, and intellectuals. Even today, walking in the centre of Forio means immersing yourself in a timeless place, among pottery shops and artisan shops; no doubt, Luchino Visconti was fascinated by it! There is also nature. Visit the gardens of La Mortella to immerse yourself in a real tropical paradise, or reach one of the beaches of Forio. Any suggestions? Sorgeto boasts not only boiling waters that flow directly from the sea, but also sunsets that are among the most evocative on the island. From Cava dell'Isola, it is also possible to see the famous Chiesa del Soccorso. Punta Caruso has volcanic rocks and Mediterranean vegetation and is close to the La Colombaia museum.

Along with being the highest of the municipalities of Ischia, Serrara Fontana is also surrounded by nature, from its green hills to its coast. Immerse yourself in the tranquillity and the rural and peasant traditions of the island by taking a walk, which will allows you to experience the vineyards of Ischia and the scents of fruit trees and the Mediterranean. Moreover, from here, you can reach the summit of Mount Epomeo, which dominates the whole island and the Gulf of Naples, with the nearby Capri and Procida. Going down towards the sea, you will find the Fumaroles, where volcanic vapours heat both the waters and the rocks of the Maronti beach, shared with Barano d'Ischia. A few steps away is the ancient village of Sant'Angelo, with its maritime traditions and one of the most striking views of the island.

The ancient pillar aqueduct welcomes visitors to Barano d'Ischia, right at the entrance of the town. This is the first clue to the history contained in a small village where culture, the sea, and nature (as in the whole island) are indissoluble. From the mills of Montebarano to the tufa cellars, there are many beauties in this town, such as the church of San Giovanni Battista, one of the oldest on the island, which boasts work by the Caravaggio School. However, Barano is also a municipality surrounded by nature; think of the Maronti, one of the most beautiful beaches of Ischia, as well as the nearby pinewood of Fiaiano, which encompasses the town with its intense green. From Barano, you can quickly reach the thermal baths of Cavascura and enjoy incomparable views of the nearby village of Sant'Angelo. 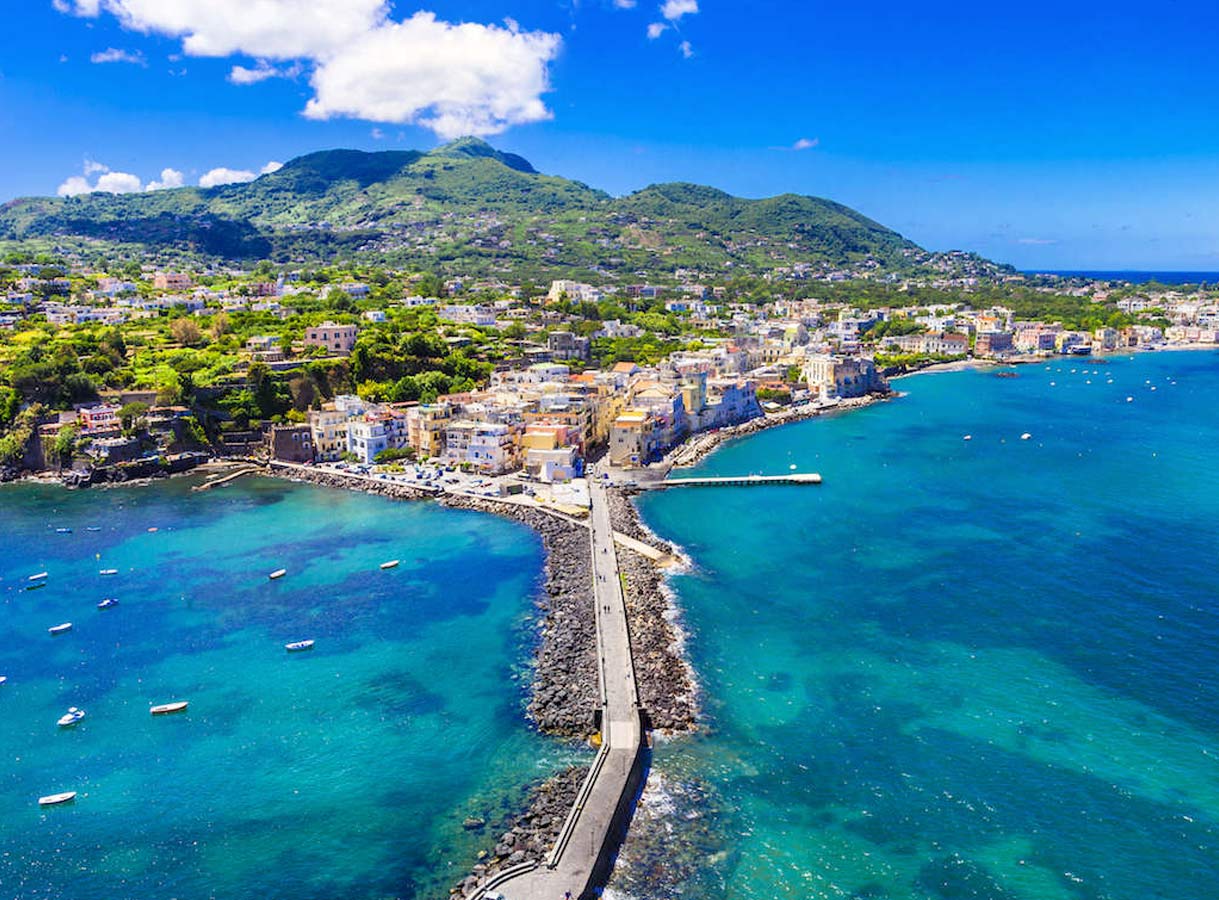 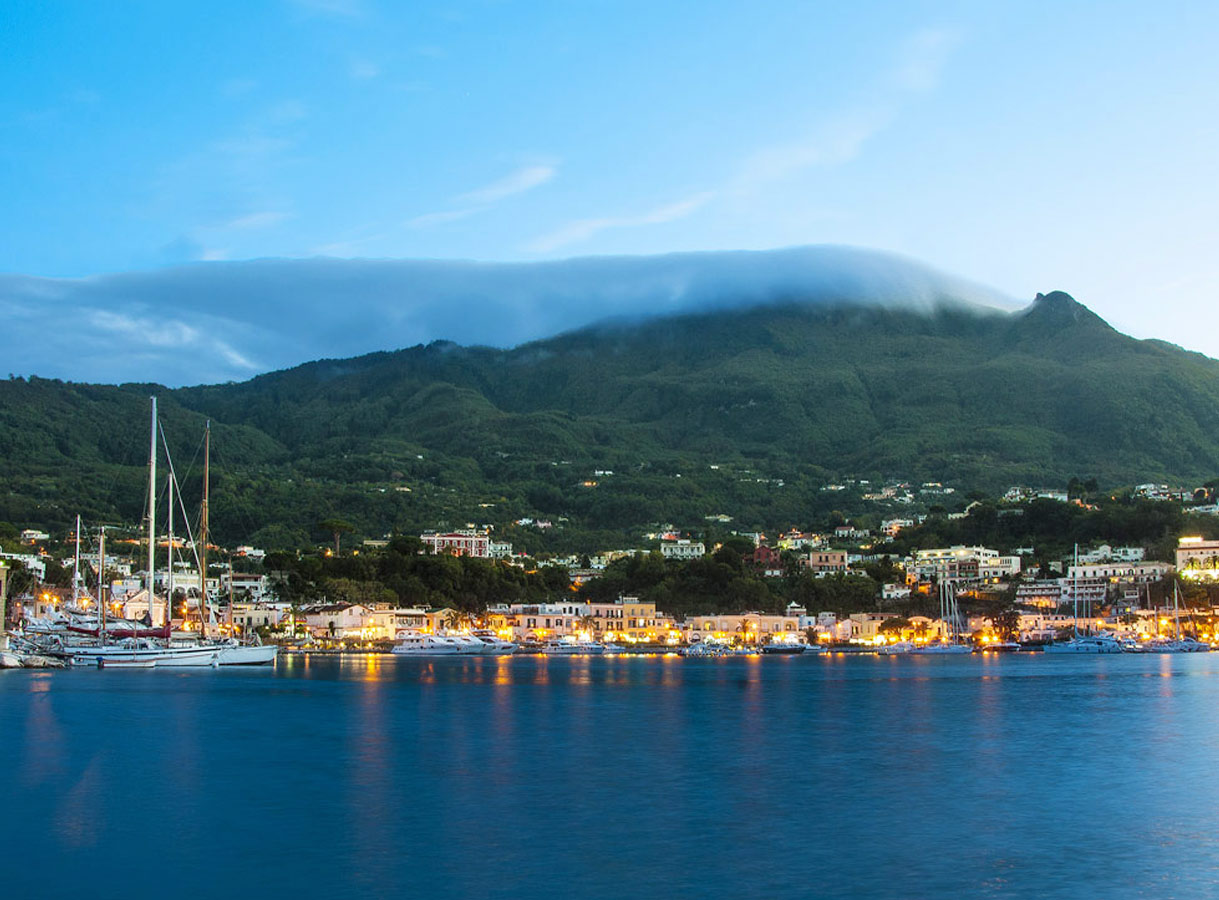 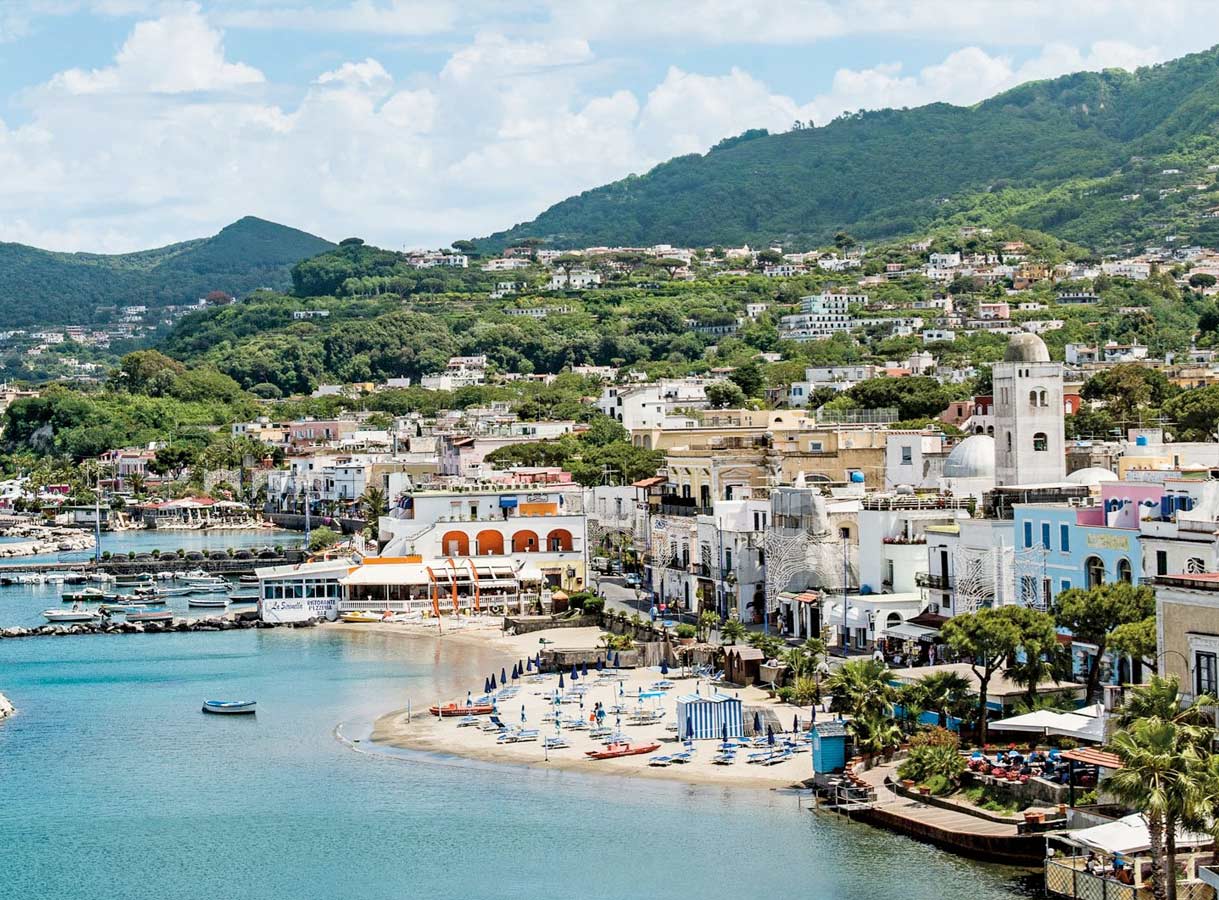 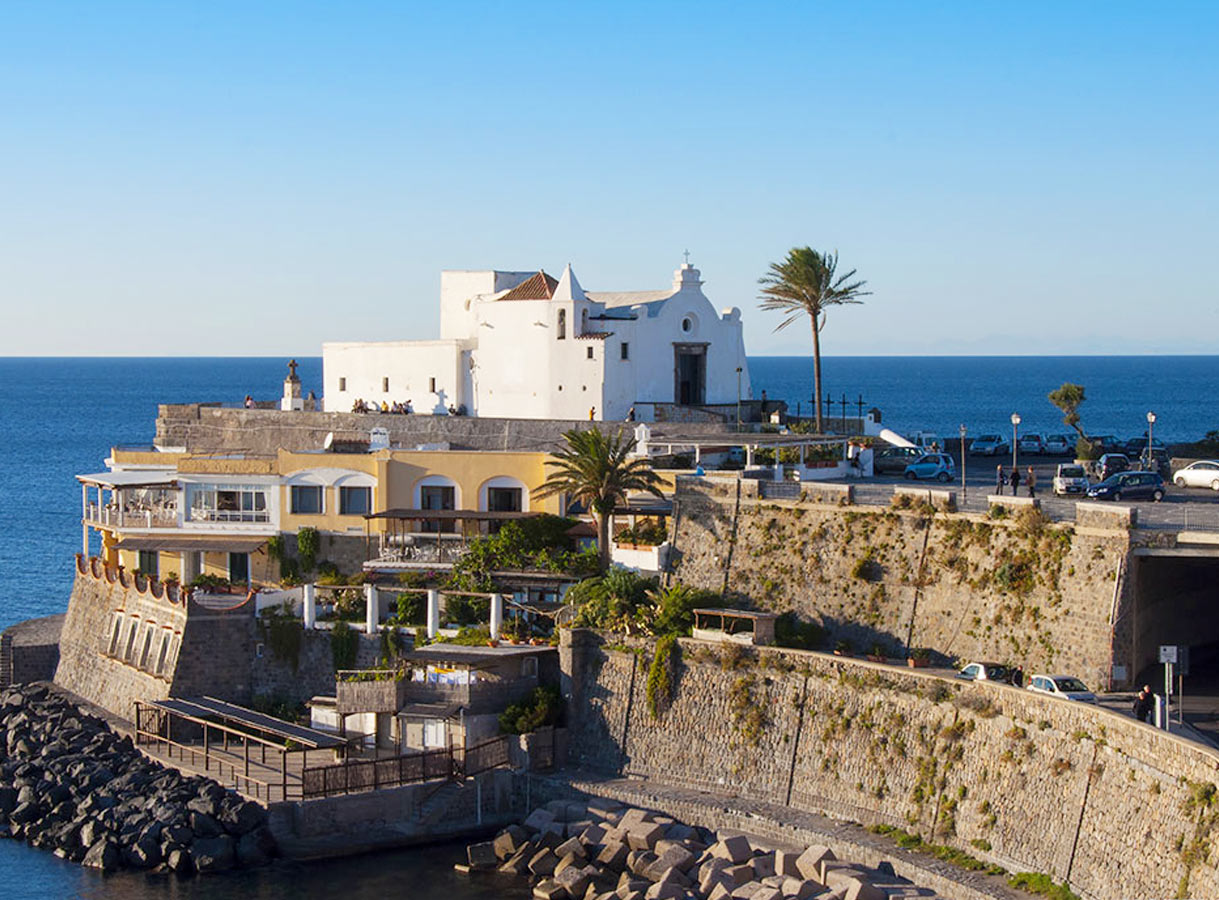 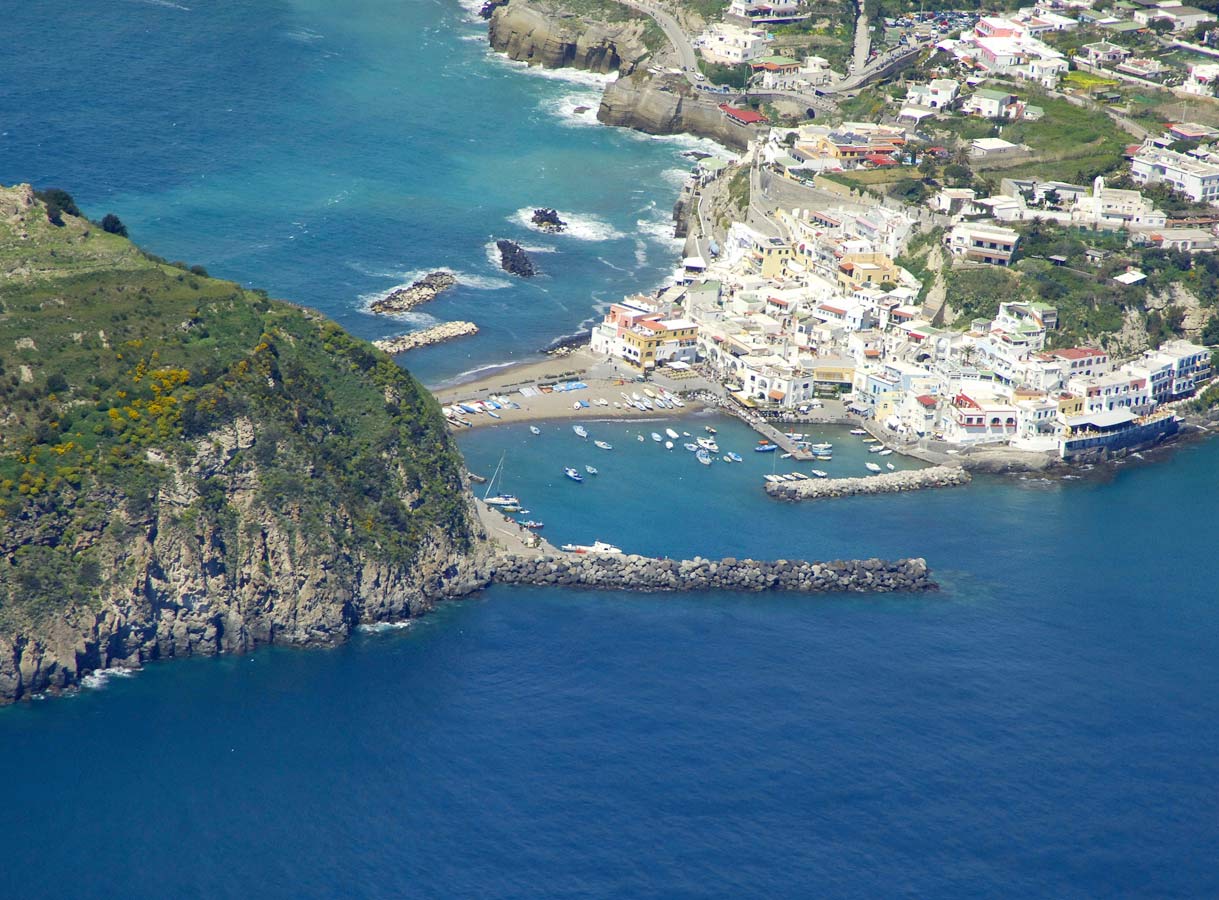 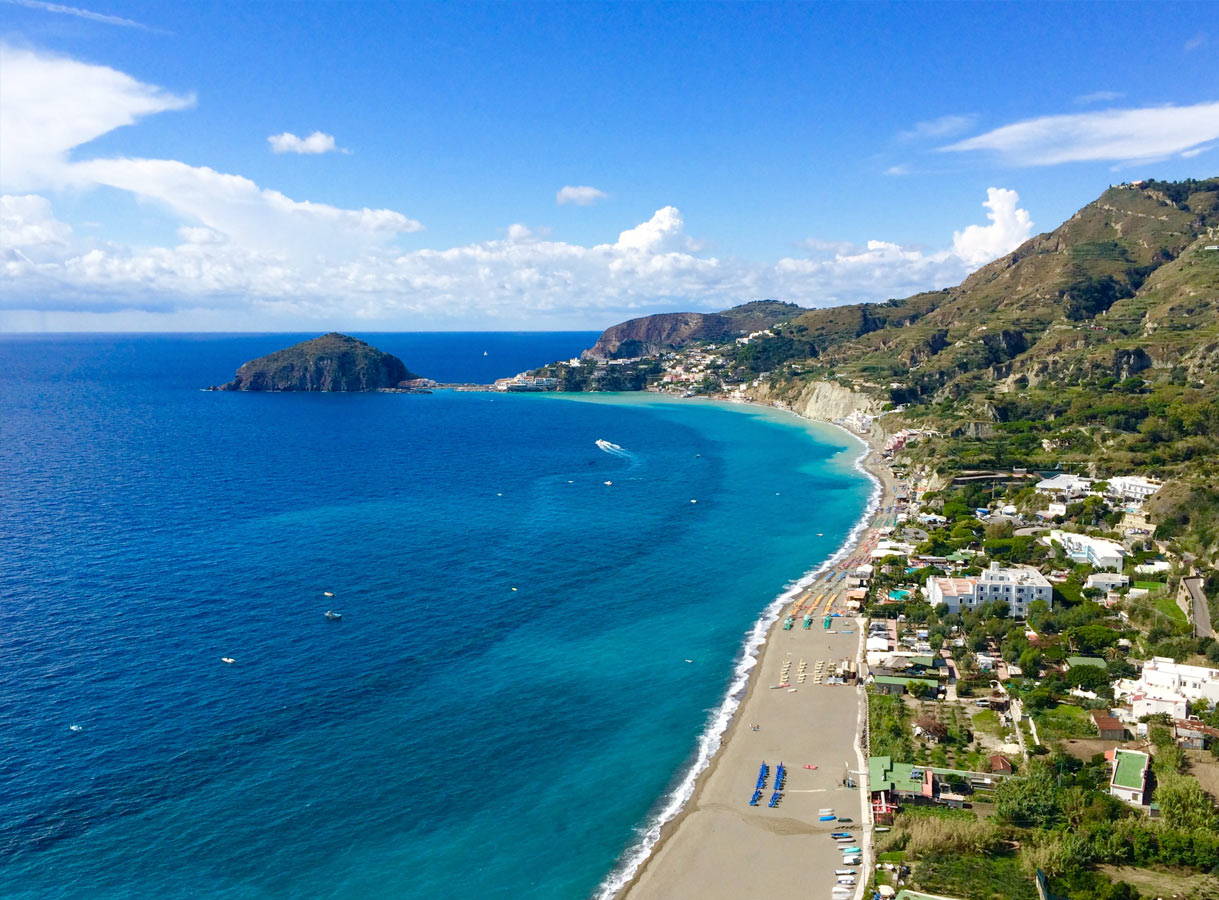